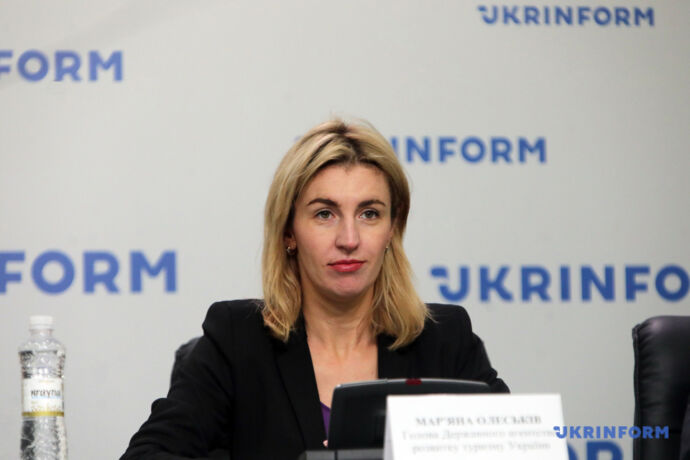 Mariana Oleskiv, Chair for the Ukraine State Agency for Tourism Development summarizes the current state of the tourism reality for Ukraine

For the past few years, despite the Covid pandemic, the Ukrainian tourism industry was showing signs of recovery. We expected more tourists to come in 2022. Those plans were totally ruined on February 24th when Russia launched an all-out invasion of Ukraine by land, air, and sea trying to ruin our peaceful cities, historical buildings, and museums, killing innocent children!

The Russian Federation has carried out a deceptive and absolutely outrageous military attack on my country!

Just imagine, in 2022, cruise missiles attack residential neighborhoods, kindergartens, and hospitals in the heart of Europe. The price Russia pays for this “tourism” is thousands of dead Russian soldiers. Meanwhile, the price Ukraine pays is thousands of civilians killed while beautiful towns, historical buildings, and museums have been destroyed.

The armed forces and citizens are defending Ukraine till the end! The whole world is repelling the aggressor through the imposition of sanctions. The enemy must suffer significant losses. By starting an unprovoked war against Ukraine, the Russian Federation blatantly violated the principles of international law, enshrined in the United Nations Charter and other numerous international documents.

In this case, I appeal to the entire global travel industry for action!

We appearl to stop all travel to Russia and to cut off any cooperation with the aggressor country. I am grateful to those of you who have already stopped cooperation with Russia. But in many cases, there are half actions or no actions at all.

I appreciate the United Nations World Tourism Organization (UNWTO) General Secretary and those members of the executive council that supports suspending Russia’s membership. I appeal to all member states to vote for this decision at the General Assembly that will take place in the near future.

At the same time, the World Travel and Tourism Council (WTTC) has not yet taken any action to stop cooperation with Russia.

I am also thankful to foreign booking platforms like Expedia, Airbnb, and Booking Holdings for suspending all operations in Russia and travel services in Belarus.

Many EU and American airlines for suspending all flights to and from the Russian market, GetYourGuide, and Rick Steves’ Europe, which stopped offering experiences in Russia.

There are also a few hotel chains that have withdrawn from Russia. Nevertheless, just a half of the sanctions don’t work and to stop Russia it is necessary to cut off any cooperation with the aggressor country.

However, hotels under Marriott and Hilton brands still operate in Russia and companies are not taking any action for a ban on the use of these corporate names.

InterContinental Hotels Group, a British hotel operator with 29 hotels in Russia, suspended its investments in Russia on 10 March 2022.

However IHG are still actively taking bookings and there is a new Crowne Plaza opening in Moscow in June.

A few days ago Accor Group announced that all management operations including booking, distribution, loyalty, and procurement services to hotels for which owners are included on any international list of sanctions will be suspended. However, ACCOR is still confirming rooms in their hotels in Russia.

Till now all of the Turkish tour operators continue to work with the Russian market and sell tours to Russians.

With many routes to and from Russia effectively closed, owing to the imposition of sanctions following the invasion of Ukraine, air travel via Serbia, Turkey, and the UAE surged by over 200% on pre-pandemic levels.

As a result, Russians can still travel to any European, Asian countries and the even USA without problems.

Everyone needs to understand, when they bring travelers to Russia, when they cooperate with Russia, they also bring them Dollars or Euros. Such hard currency will support Putin’s aggression.

It is a terrible crime against humanity and today, Russia has decided to threaten the whole world with nuclear weapons.

I also highly appreciate any help from our partner countries. Nevertheless, a lot of them continue to accept Russian travelers.

One of the most important issues for us is a suspension of Russia’s membership in UNWTO. I would appreciate any help with reaching Ministers from the Member States to get their support in this.

We are confident that just a strict ban will help to stop the disgraceful military aggression.

Taking this opportunity let me express my deepest respect to the team of the World Tourism Network and the SCREAM for UKRAINE campaign.

Tourism is the best tool for people from all over the world to get to know the beauties of nature and other cultures. Tourism can ... Read More

I am a home-based agent in partnership with my husband and have a few independent agents. I organize and plan mostly luxury travel. I would ... Read More

www.wcplindia.com |  09810008206 I am in Aviation industry since last 34 years presently representing World connect pvt ltd as Head of Sales- India based in ... Read More

Israel Ministry of Tourism (IMOT) is Israel’s government tourism board. Its mission is to promote, brand and market travel to Israel through various channels. It ... Read More

Having spent 10 years both traveling and working around the world, I have a deep passion for exploring new countries and new cultures! But I ... Read More

Ahmed Mahmoud believes that revenue management is the future of the hospitality industry and sees great potential for hotels to increase their profit performance through ... Read More

I am a freelance travel and music journalist with 20-years of experience. I am a member of the Society of American Travel Writers (SATW), a ... Read More

I am a Tourism professional and entrepreneur. WTN is a network that will be beneficial to my business as a small company. The network is ... Read More

I firmly believe that distinctive cuisine and life-changing travel experiences are best savored by those driven by curiosity rather than solely on the recommendations of ... Read More

Mark J. Spalding, President of The Ocean Foundation is a member of the Ocean Studies Board, and the U.S. National Committee for the Decade of ... Read More

Small retail agent specializing in safari and soft-adventure travel What to do: I have no idea. Period. www.thetravelcounselor.com  | [email protected] Read More

WTN and US Travel Avisories

Travel warnings are issued by governments to protect their citizens from crime, murder, and wars. The US State Department issues travel warnings for US citizens ... Read More

Lecturer in International Tourism Management at the Faculty of Business and Law and awarded associate researcher at the Centre for Trust, Peace and Social Relations ... Read More

Mr. Subedi is not a new name for the Nepalese Trek Tour Industry. He has been involving in this sector for more than 14 years. ... Read More

30 Years in the Tourism Business acting as a Travel Manager, Incentive Travel Executive and DMC on French Riviera, my concern is all about TRAVEL ... Read More

'Ive been in the travel industry for over 25 years. I own my travel agency and since the COVID-19 been actively participating in the seminars ... Read More

After my International Career as a Civil Servant for the European Commission in Brussels, I continued activities in the field of Sports, Tourism, and Leisure. ... Read More

My name is Victoria Falk and I am passionate about all things relating to travel. I am the award-winning CEO of Passionate Travel Inc. I ... Read More

I am working in the hospitality industry so I can join that tourism network it will be more helpful to us and our property will ... Read More

Let’s venture to rediscover the places we love to explore—safely—right here at home in Manitoba. We can have our hearts set on things returning to ... Read More

Born and raised in the beautiful city of Bhaktapur, trekking is my passion. I love the treks that take me off the beaten path, allow ... Read More

Since 1997, the writer and networking entrepreneur Carsten Hennig is specialized on worldwide hospitality management together with background articles, market analysis, and video newscasts, and ... Read More

There will be a whole new chapter after the pandemic in the Tourism industry as well, being part of a global network can give you ... Read More

I am the CEO of Hasfik Educational Services, we organise educational tourism services for schools and corporate bodies as well as biographical documentation. We intend ... Read More